Home / Why is Fire Detection Important? 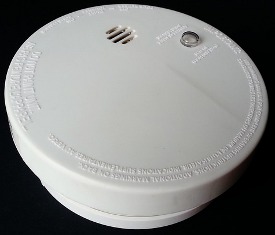 A medical alert system is a 24-hour emergency monitoring system. It usually includes a wristband or belt clip with a push-button monitor. If you are having symptoms of a heart attack or stroke, or have fallen, you could push a button and a central base station would answer your call for help. Other larger home monitors detect other emergencies, such as an intruder or fire. These monitors, however, are not included in all medical alert system packages. For example, the LifeFone and MobileHelp packages do not come with fire, smoke, or co2 monitors. The following information explains why fire detection is so important, especially for seniors. Also included is information on how fire detection works and about a couple of companies that do provide fire detection in their medical alert system packages.

How fire protection works with a medical alert system

Most fire monitors that come with medical alert system packages, monitor for carbon monoxide, fire, and smoke. There are several monitor alarms placed in different areas of the house. In addition, a base station unit connects via phone line or the internet. When an alarm senses fire, smoke, or co2, it sounds an alarm, and it flashes lights. This alarm sets the rest of the monitor to alarm including the base station. The base station then signals the monitoring service station, which then notifies the fire department and police.

Two of many Medical alert companies that have fire detection are Bay Alarm Medical and Life Alert. Both of these companies have a 24-hour monitoring service facility. They both do medical monitoring (for falls, heart attacks, strokes, etc…) with a pedant or a wristband. They also have fire, smoke, and co2 monitoring alarms that come with a base station. They both have two-way communication services. Both companies charge an installment fee, and ADT requires a long-term contract where Life Alert does not. Neither company provides a lock box. A lock box is used to lock a door key in it, outside of your house, so the firefighters can use it to get into your house, if needed.

In conclusion, there are many reasons, as described above, why it is crucial for seniors to have fire detection services with their medical alert systems. As you digest the information on MedicalAlertsGuide.com take note of those companies offering fire detection, it can be a matter of life or death. You will see that those companies providing this extra level of protection tend to score higher in the reviews and ratings. Our guidance is to pay the little extra for the additional services (in some cases they are included) as they provide a lot of peace of mind for a little additional cost.