LifeStation’s medical alert system has generated mainly positive reviews from critics and customers alike. The New Jersey based company has a respected reputation in the medical alert industry and has been in business for over 35 years. Their medical alert system is available in both the United States and Canada. The system is mainly distributed through LifeStation’s relationships with various hospitals, healthcare providers and local governments which is different than the mass consumer appeal which Life Alert has built up through catchy advertising.

Help is available at the click of a button. Whenever assistance is needed, senior citizens click the emergency button on their waterproof pendant that can be worn on a bracelet or a necklace. They are then connected directly to a LifeStation representative. The technology works very quickly, as the typical response time is only about 20 seconds. This is an excellent time compared to competitors. Once the button is pressed, the operator will speak with the senior citizen through the amazingly powerful speaker and the ultra sensitive microphone that are built into the base unit. If emergency personnel is necessary, their help will be sent to the elderly’s home.

Accessories are available for a few extra bucks per month include: 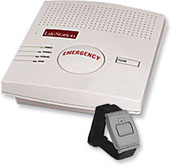 The LifeStation’s main equipment consists of a wearable pendant and a base unit with a speakerphone and a microphone. The extra options mentioned above can also be added to the basic plan for an extra fee. Installing the equipment is so easy that it takes 5 minutes or less. Just connect the base unit to a phone line and plug it into an outlet for power. The panic button will trigger the phone connected base unit as long as it is pressed within 400 feet. This is an average range compared to competitors’ equipment. Yet most homes only need a medical alert system that extends this far. The base unit is UL Listed, meaning that it is up to the safety and operational codes of top appliances. It is important to note that not every medical alert system is UL certified.

The system operates with traditional phone lines and critics have noted that it “usually” works with VoIP phone lines. Yet relying on it to function over a VoIP is not encouraged as voice over internet technology isn’t as reliable as a land line. Unfortunately, this system will not work with Magic Jack.

Seniors who don’t have a land line or a VoIP can utilize LifeStation’s brand new mobile alert technology that connects home’s base unit to the emergency help center by way of a cell phone network. This new technology is conveniently built right into the system but it costs an extra $9.95 per month.

Thankfully, the base unit self-tests itself on a weekly basis to ensure optimal functionality. One standard help button is provided though extras can be ordered for family members at an extra cost of $2.49 per month. This additional fee for another pendant does not trigger a second monthly subscription fee. Pendant help buttons last up to 4 years, a quality lifespan compared to that of competitors’ pendants.

The base unit’s backup battery operates for up to 32 hours so that there is still access to an emergency operator when the power is down. Anyone who wants to move the base unit to another location merely has to call LifeStation by way of the help button a few days before they want the unit moved. LifeStation will do the rest of the work. Also, if any equipment breaks or malfunctions, the company will repair it. This includes batteries.

It is very hard to find any criticism of LifeStation’s customer service. LifeStation operates its own in-house emergency help center that follows the CSAA Five Diamond standards. Help is available every hour of the day and night, every single day of the year, including holidays. The service is available throughout the United States as well as Canada. An extra emergency agent assists the agent who answers the phone call. One talks and the other acts. Hardly any competing services offer this extensive and in depth level of customer service.

The best part about the company having its own call center is that management can keep tabs on the quality of phone calls. This almost guarantees that emergency representatives will work to a high standard. Each emergency representative passes through an intensive 6 month training process before they are allowed to man the phones alone. It is important to point out that plenty of competing medical alert system providers outsource their phone calls to a third party call center.

The company conveniently offers an emergency action plan that is uniquely tailored to each customer based on who they want to be contacted in the event of an emergency where they are unable to speak into the base unit’s microphone. Even if the emergency operator needs to follow this protocol, he’ll do so without hanging up the line on the senior citizen who is need of help.

New subscribers can facilitate the sign up process by creating an account on the company’s website. There is also e-mail support but only to provide prospective subscribers with brochures. Over the past 3 years, the Better Business Bureau has only received a small number of complaints about the company. This is an excellent record of superior service that has culminated in one of the highest rated medical alert systems by the Better Business Bureau. 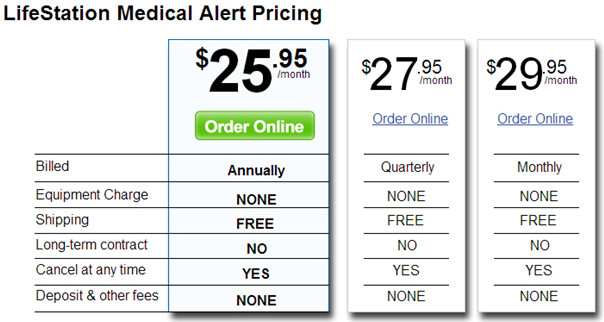 LifeStation’s medical alert system is activated for free and a long term contract is not required this keeps the Lifestation cost low. Customers can cancel the service at any point without a fee but they will have to send the equipment back to the company within 30 days. All of the equipment is sent to customers at no cost, even the replacement parts. The service costs a very affordable $29.95 per month. This isn’t the cheapest rate in the industry but it is a very competitive one. The monthly price drops to $27.95 when customers pay in installments every three months. It can go as low as $25.95 if the yearly costs are paid all at once.

LifeStation’s medical alert system is among the best in the industry. Its customer service is premier and subscribers rave about the company’s equipment, policies and wide variety of payment plans.